Write Your First Haiku: A guide on how to write a haiku. 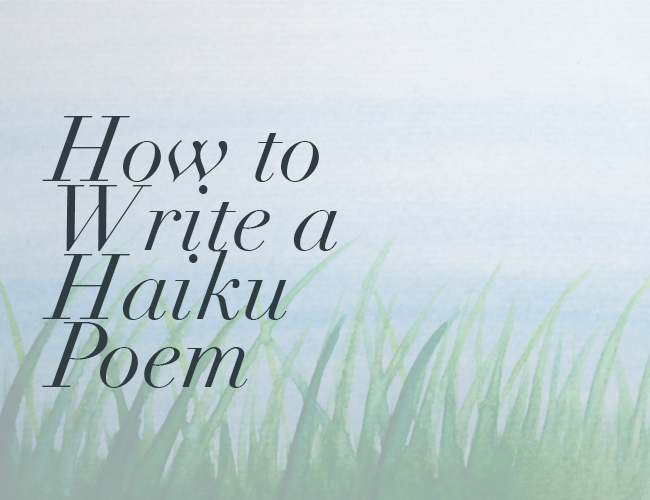 Writing poetry in the Japanese style may be a lot of fun. However, Japanese poets emphasize cadence and rhythm more than they do rhyming. Therefore, rather than focusing on rhyming the final words in lines, you should count syllables and examine patterns when creating Japanese poetry.

Haiku is a prominent type of Japanese poetry. It has 17 morae, the Japanese measurement of the pitch. There are 5, 7, and 5 morae in each of the three phrases. Morae become syllables when written or spoken in English. The “tanka” tradition was established by Japanese poets between the 9th and 12th centuries. Each participant in this progressive poem would contribute three lines in the standard 5-7-5 format before passing the poem on to the next person. The additional lines would each have seven syllables, but the starting poem was designated a hokku.

The term “haiku” originates from the Japanese art form hokku, which developed into its genre during the nineteenth century. The word “haiku” is both plural and single. Writing haiku may be a lot of fun since you have to arrange the verses like pieces of a puzzle. But if you want to make it as a haiku poet, you need to know the proper way to write one, just like the Japanese do.

Haiku is not a made-up language. It tells a true story. Do not think of perfection; consider realism. While you’re at a loss for words, ask yourself, “What is most important about this moment?” Haiku usually contrasts two thoughts. Sometimes, in the third and last line, an unexpected connection is revealed between the three lines. In haiku, the poet creates an atmosphere, introduces a narrative potential, and settles back into silence.

Here in this content, you are going to know about how to compose a haiku in detail. Here you going to see step by step guidelines to write a Haiku.

How to compose a haiku poem: some guidelines?

Although the structure and requirements of haiku are simple to grasp, it may seem challenging to compose a succinct and moving haiku. what is a haiku? To help you get started, here are some suggestions on how to write a haiku. So, continue reading this content till the end carefully, to know completely about the writing style of Haiku.

One of the most important things to keep your mind cool. Great haiku poetry originates from superficial observations and accepting what occurs to the mind without judgment or change. Give yourself permission to think freely and try to capture the imagery in the poem’s process. The more you will think freely the more you will get an idea and can write more quality poem. Keep yourself free, be relaxed and enjoy the process while writing a haiku, so that you get a better result.

Put another way: do not cover up your true feelings. This advice is a nod to the poets of the Beat Generation, and it’s meant to encourage you to see your thoughts as fertile ground for haiku and other forms of creative writing. Whatever you think, just write it down, do not hesitate to do it, because it will surely be the finest thought on your fresh mind.

Keep a little notepad with you at all times, and write down your ideas, observations, and dreams as they come to you throughout the day. Your notes may eventually coalesce into stirring haiku poems. Do not edit your writing; instead, write down everything that happens. This will help you to make a better haiku poem.

The meaning of your statements is irrelevant. The infinite potential of the human language is the subject of much wonderful poetry.

Spend some time studying the work of other poets and trying to mimic their techniques if you want to gain a feel for the haiku form. You can learn much about how other poets view and record the world by studying their work. These things will help you to think better in right way.

Your poem should be brief and imagistic, but you should be careful not to lose sight of your original intent in trimming. But being concerned with the number of syllables in a word can hinder you from writing your genuine thoughts. You can edit it later, so at the time of writing your thoughts do not be hesitated.

Poems with solid imagery can function as symbols, conveying numerous meanings to the reader. Bash’s poems, which are used as haiku examples, are replete with allegory and metaphor, such as the one in which the speaker’s friends are depicted as birds and fish.

Poems written in the haiku style are typically untitled. Although a brief, descriptive title is not required for a poem, it may be included if it helps the reader understand the poem. Only do this when the clarity is necessary you might find that your poetry benefits from leaning into mystery.

Lastly, here is a haiku suggestion from the extraordinary Allan Ginsberg. There is plenty of different haiku poetry prompts, but this one has a modern feel and encourages the poet to rely on their observations.

Line 1: – What’s making you so crazy? Something that causes you to be constantly perplexed.

Line 3: – What do you see right now where you are?

Since you know nearly everything there is to know about haiku, you should try it. The easiest way to begin is to let your mind wander and be receptive to new ideas, whether you’re writing for yourself or intend to share them with others. Do not overthink this at first; write whatever comes to mind.

Exploring the Different Types of Careers in Construction

Why Spelling Bee Words Are So Important!

How to prepare your kids for kindergarten? 5 amazing tips!